Bounce Your Toxins Away! 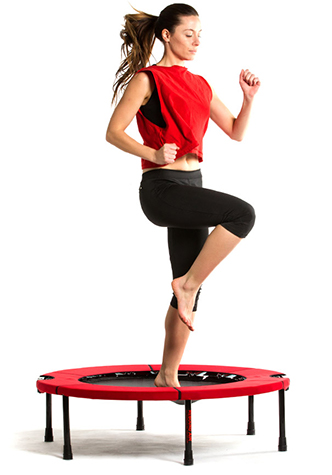 The best exercise to do is the one you will do.  Rebounding is fun, fast and creates incredible health benefits.

I’ve been using my rebounder for over 22 years.  I started when I could not lose my ‘baby fat’ after baby number 5 when I was 30.  Seven months after Levi was born, and several months of frustration with not being able to lose the weight, a friend told me about the rebounder and I’ve never looked back.  I use it several times every day and because I own a foldable rebounder, I bring it on longer trips.

One of the most important health benefits of rebounding is the ability to rid the body of toxins through the lymphatic system.  Nothing does it better than a rebounder.  And…who doesn’t like to jump? 🙂

There are at least 33 fascinating ways the body benefits from Rebound Exercise, detailed below:

1. Rebounding provides an increased G-force (gravitational load), which benefits the body by strengthening the musculoskeletal systems.

2. Rebounding protects the joints from the chronic fatigue and impact delivered by exercising on hard surfaces.

3. Rebounding helps manage body composition and improves muscle-to-fat ratio. Rebound Exercise benefits you by giving you more control over these.

6. Rebounding establishes a better equilibrium between the oxygen required by the tissues and the oxygen made available.

8. Rebounding tends to reduce the height to which the arterial pressures rise during exertion.

9. Rebounding lessens the time during which blood pressure remains abnormal after severe activity.

11. Rebounding increases the functional activity of the red bone marrow in the production of red blood cells.

13. Rebounding causes core muscles and large muscle groups to contract, resulting in the rhythmic compression of the veins and arteries, which more effectively moves fluids, both blood and lymphatic, through the body and back to the heart, lowering peripheral blood pressure and lightening the heart’s load.

14. Rebounding decreases the volume of blood pooling in the veins of the cardiovascular system preventing chronic edema.

15. Rebounding encourages collateral circulation by increasing the capillary count in the muscles and decreasing the distance between the capillaries and the target cells.

16. Rebounding strengthens the heart and other muscles in the body so that they work more efficiently.

21. Rebounding for longer than 20 minutes at a moderate intensity at least 3x per week increases the mitochondria count within the muscle cells, benefiting in total endurance. Perhaps you will easily skip those naps.

22. Rebounding benefits the alkaline reserve of the body, which may be of significance in an emergency requiring prolonged effort.

24. Rebounding improves the brain’s responsiveness to the vestibular apparatus within the inner ear, thus improving balance.

25. Rebounding offers relief from neck and back pains, headaches, and other pain caused by lack of exercise. Rebound Exercise has been shown to benefit body alignment and posture.

27. Rebounding allows for deeper and easier relaxation and sleep.

31. Rebounding tends to slow down atrophy in the aging process.

32. Rebounding is an effective modality by which the user gains a sense of control and an improved self image.

I use and recommend Rebound Air.